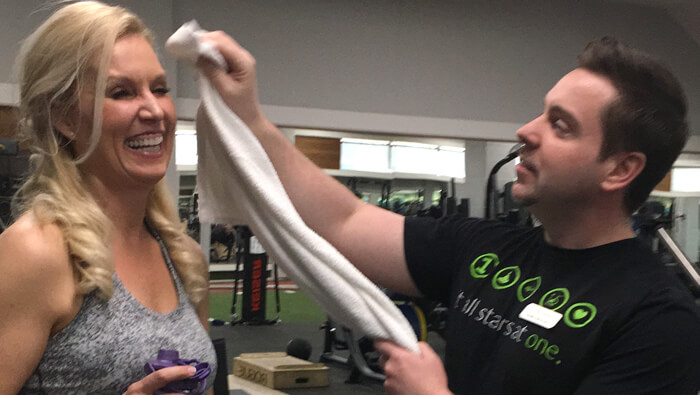 Barbara Horvat has been a Member at One Health Clubs since 2011 and in the last year has gone through 3 surgeries (hip and knee replacements). BUT this doesn’t stop her from getting to the gym. She is working on regaining her strength and is DETERMINED to smash all her past fitness goals!!Barbara was diagnosed with Osteoarthritis over 15 years ago and over the years it eroded her right hip and right knee joint. Even with these challenges, she still maintained a regular exercise regime to stay strong and healthy. But as time went on, the daily pain she experienced became worse.

In August 2016 her hip and knee became so painful, that she had to begin walking with a cane. Walking and exercising was increasingly more difficult, the pain became unbearable and sleep was nonexistent.

She tried various medical treatments to try to help slow the joint erosion, but nothing helped. Barbara consulted with two surgeons, one telling her there was nothing they could do because she was too young, and the damage was so severe. Not willing to accept this, she consulted with a second surgeon, who gave her hope and told her there were options.

She had a total hip replacement in March 2017 which was a SUCCESS and left Barb feeling better than she had in a long time! She was able to get back to her workouts in the gym and begin rebuilding her hip strength and prepping for her next BIG SURGERY. 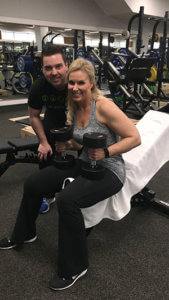 In August 2017, Barb had her knee replacement surgery, but unfortunately, this did not go so well. No one knew what happened, but something was very wrong and after 2 months of unbearable pain and countless appointments, a revision surgery was discussed. She was given a month to try and turn things around and being the strong and stubborn person that she is, Barb kicked everything into high gear, regardless of the pain; determined NOT to have a third surgery!

She spent the next month in physio and chiro appts three times a week, worked with Nenad, her Personal Trainer 4-5 times a week, did home exercises and went through 2 painful splints that she had to use a few times each day.

Feeling drained and demotivated after the month, she was told they needed to proceed with the revision surgery. On February 9th, 2018, Barb went for her third operation in less than 10 months!

“After a very complicated surgery, there were a few really tough weeks, but now I’m BACK and on a mission to become the best version of ME that I have ever been!” – Barb

She is now back in the gym and training with Personal Trainer Nenad 3-4 times per week.

“Nenad is the best Trainer I’ve ever worked with! He’s incredibly knowledgeable and knows just how much to push me considering my limitations. He makes the toughest days fun, which helps a lot too”

Barb also sees Nutritionist Kelly Carter 1-2 times a week to help keep her body healthy and to keep her on track. Her upbeat and positive attitude is an inspiration to us all.

“There is no better feeling than hearing from members that I know, and more so from those who I don’t know, that I’ve inspired them. That humbles me and makes me want to INSPIRE people even more.”

We are excited to announce Barb as our newest One Health Clubs Brand Ambassador. We can’t wait to follow her journey of becoming bionic and watching her smash her fitness goals!